This 5-7-2018 episode of Inspirado Projecto, “Virtual”,  features a couple of very interesting folks:

Orly Rodriguez joins us via Skype from Florida, currently cobbling together a virtual reality experience based in the world  and characters of Twin Peaks, called “The Archivist.” Orly is additionally making another VR game called, “The Question” (one of the characters, “The Guide”, is voiced by yours truly), which is more cosmic-oriented and Twilight Zone-inspired. You can find the Official Facebook page HERE!

Another gent Skyping in,  is Standup Comedian (and longtime improv-collaborator since High School), Jason McNeil, from the Chicagoland area. McNeil’s performances are not limited to stages within traditional venues. He plays on all size stages such as: living rooms, basements, meeting rooms, sidewalks, and other unexpected locations. “Hilaritygram”, his door-to-door comedy business, is perfect for any kind of celebration and can be ordered all over the Chi-town regions! He also voices a couple characters for “The Archivist”. One of those, is the narrator featured in the extraordinary trailer below!

These are some screenshots of familiar locations/characters from the extraordinary world of “The Archivist”.  Also included is a photo of when Jason and I appeared in our first play together in High School, “Golden Boy”. The pics of the bald character in front of the door/purple backgrounds, is “The Guide” from Orly’s other VR, “The Question”.

In this episode, we also featured several unique selections from Brian D’vil (one of our original co-hosts of Inspirado Projecto and Curiosa Obscura on KCHUNG 1630am), Worldland (another one of P.Q. Ribber‘s many side projects), Bukket (Joe McGaha‘s band), Funfacts by Henry D. Horse, and a selection from Man Behind The Machine!

If you’d like to watch this episode unfold in a video version of the broadcast, you can check out our archived Periscope version HERE!.

Did you know Inspirado Projecto Podcast can now be subscribed to on iTunes?

Its also available through many various podcast apps AND now its feeding through Mixcloud!

You are invited to send your audioscapes to: inspiradoprojecto (at) gmail for inclusion on both the radio show AND podcast! 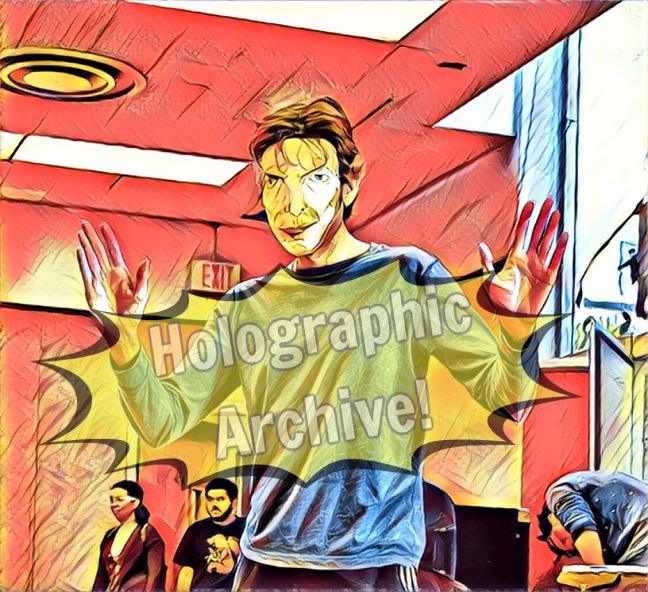 On the way to KCHUNG Studios today, I received a text message from Nicholas, Station Manager Extraordinaire, saying today’s Inspirado Projecto had to be called off. The door to the building was locked. He had been there for 90 minutes already, knocking and calling the landlord, with no answer. A few days ago, I invited Casey Driver from A.V. Media (the kinda fella who interviewed Alec Smart and I after FAR Bazaar) to check out KCHUNG Studios during our live broadcast. I texted to let him know we had to call off the broadcast and he suggested we meet and talk anyway, as he was already on the freeway. It was a wonderful opportunity to find out about his projects and tell him about the show. We picked the NoHo Diner and recorded our conversation as a podcast of sorts.

The ‘Zine Movement, microbroadcasting, drive-in/up movies, pop-up stores, artist communities, the Youniverse, synchronicities, virtual reality and much more is discussed in this version of Inspirado Projecto!